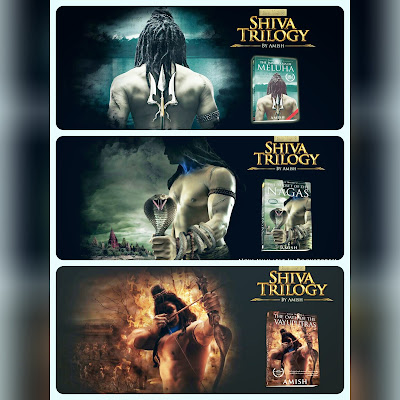 Shiva Trilogy :
1. The Immortals of Meluha
2. The Secret of the Nagas
3. The Oath of the Vayuputras

I'll go with the question first as why I started reading the 'Shiva Trilogy'?
So, my friend recommended it to me. Although he hadn't read it but he did insisted me upon the advise of a friend of his, almost a year ago. My friend told that his friend told him that he feels like a god in himself after reading these books. I thought the book 'Meluha' as a motivational book, in which the author tries to motivate you by some of the examples of already succeed people. Then I saw the cover of it. A man with hair tied in a bun standing by keeping his back which is ornamented with the battle scars. I thought it is surely not like a motivational book. But still I didn't consider to read it. I didn't know then that it is a trilogy - a series of 3 books. After about 6 months, the same friend again insisted me. This time I took the recommendation seriously and started reading the first book, 'The Immortals of Meluha'.At first, it seemed to me like an already heard fable from my parents and grandmother. The same ethereal characters, Shiva, Nandi, Sati, Daksha etc. The holy pilgrimage place, the Hindus want to visit at least once in the lifetime; Kailash Mansarovar. The same ideal civilization that we studied in the textbooks. The prosperity it contains, the way of life its people attached to, the construction of the city; all were the same. I thought what does the writer wants to prove by rewriting this? Nevertheless, I kept it reading and completed the trilogy. Throughout the journey of my reading, I also used to watch some of the interviews of Amish from the YouTube to understand the books from his perspective. There are some points upon which I'd like to review this whole trilogy.

• The detailed description :Although some things I already knew about the Indus valley civilization, the way Amish had described in the book; is very fascinating. And this thing can be seen in all the 3 books. The description of the things is very detailed. Amish makes us travel in almost all the directions in India, even beyond India. He takes us from the marvelous mountains of the Himalayas where Lord Shiva abodes to Panchavati where Lord Ram resided during their forest dwell. From the deserts of Iraq and Mesopotamia to the banks of Ganga at Kashi. And every time he describes a city, as if he himself resides in it for years.

• Reasoning and Research:Another thing which I liked more is the reasoning behind every small things, from the Meluhan cities being set on the platforms to the reason why good turned evil. From the process behind Somras making our lifeline longer to the reason behind Lord Shiva's 3rd eye in the middle of his forehead. Among these, the reason behind good turning evil I personally liked the most. It shows how detailed the author researched before and during writing a book. Whenever he makes the protagonist and his team travel by the ship in a river, the author describes its course as if he himself has traveled first and then wrote this. I used to check in the google maps every time it describes something by the course of the river and it almost all the times it landed up being correct. Besides it, the author tried exceptionally well to explain why the things we today, are in this way by reasoning from the past. E.g. The extinct of Saraswati, Holiness of Ganga, Lord Ganesha's elephant head and Goddess Kali's four hands.

• War scenes :The war scenes described in the books are very fierce. The fierceness of the scenes increases by every passing page.The last battle at Devgiri between Sati and Swuth's army is one such example in which the reader would also feel the pain of warrior by imagining the war scene. There are so many examples when I personally felt the pain while reading like when Ganesh was saving Kartik from the ligers, Sati and Kali fighting with the ligers, Sati and Shiv fighting with the Naga at Ayodhya etc.

• Philosophies :This is not just a mythological fiction, it also describes the philosophies of life very beautifully. Some of the quotes which I had filtered out and want to share with you; explains this point up to some extent.

One for the Engineers -'You need legendary engineers to build reality out of myth.'- The Secret of the Nagas

One,which is true even in today's context-What we are doing is taking away the lifeblood of our future progeny so that our present generation can revel in the luxury.- The oath of the Vayuputras

The books even talks about the purpose of our life -We don’t become gods because we think we are gods. That is only a sign of ego. We become gods when we realize that a part of the universal divinity lives within us; when we understand our role in this great world and when we strive to fulfill that role.- The Oath of the Vayuputras

These books give us a new perspective to see our ancient values, to see history of India and to see Lord Shiva. They keep you thrilled at every stage. They keep yourself always excited about what will happen next. Believe or not, these books have the strength to make anyone close to the god, the only condition is that the person reading it should see it thoroughly. I personally feel lord Shiva close to me like never before; after reading these books.I heard in an interview of Amish, the interviewer asked what are your plans after making all the youth of India 'SHIVBHAKTS'?And I must say after reading these books, I am becoming a Shivaholic... 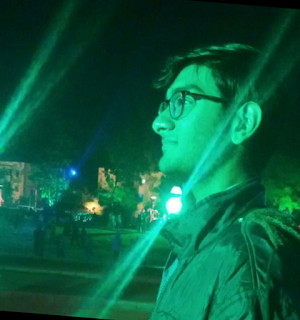